Our client, Deb, was unaware that her torsion spring had broken. She thought all was well when she decided to leave for work last Wednesday morning. She pushed the remote mounted on the wall of her garage several times, but the door wouldn’t open. Finally, after all the tries to open it, the opener broke, and the entire door caved in.

This was the result:

She called GR8 immediately and we came out soon after to have a look.

The door was damaged enough that replacing it was really the only option. We ordered a new door that was very similar to her current door, with decorative windows to let in light, and that matched in color.

If the dent is small, it’s possible to fix the dent manually. You can see how to DIY this here. We don’t recommend this as it can still cause issues with your door opening and closing properly. Best to have a tech look at it and decide if its worth repairing, replacing the panel, or just replacing the door entirely.

Next step was installing the new door. We installed two springs with the new door that were the right size to match the weight and size of the door. We also installed a new garage door opener for Deb.

Her new door looks great, and now the door opens easily and smoothly when she presses her remote! 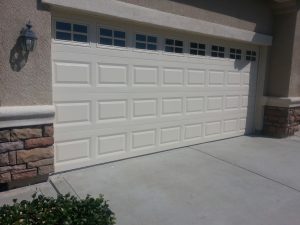 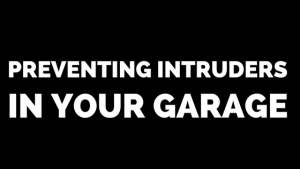